Read below to learn more about the candidates:

In March 2019 Karen was appointed by the Grover Beach City Council to fill an unexpected vacancy. She then successfully ran in 2020 and has served as Mayor Pro Tem since. Previously, she was appointed to the Council in 2007 after serving three terms on the Grover Beach Planning Commission. Thereafter, she ran and was elected in 2008 and 2012.  Presently she represents the Council on a number of County Boards: SLO Council of Governments, SLO Regional Transit Authority, South County Transit, and Air Pollution Control District.

Grover Beach has been Karen’s home for 35 years. She enjoys serving on community organizations: currently as Vice-Chair of the LMUSD Bond Oversight Committee and throughout the years for Grover Heights and Judkins PTA's, Beach Cities Little League; Grover Beautiful, and the Grover Beach Advisory Committee.

Her two adult children live locally. Karen’s son works for the SLO County Sheriff's Dept and is the father of her two grandchildren. They attend Judkins Middle and Grover Heights Elementary schools, the same schools their father and aunt attended.  Karen’s daughter works for a medical processing lab in San Luis Obispo.

Karen loves to read, walk and hang with her Belgian Shepherds—Fred and Velma—and has been practicing, performing, and teaching Polynesian dancing for about 40 years.

Stacy is a successful business owner, community leader, and California native. As a local insurance agent and financial advisor serving the San Luis Obispo County community since 1989, she has serviced 3,500+ policy holders, addressing a variety of insurance needs and providing financial guidance for individuals and their families.

Stacy has been named to the Farmers Insurance® President’s Council 14 times, an honor given to the top 1% of agents and district managers.

San Luis Obispo County has been Stacy’s home for more than 35 years and she is dedicated to maintaining the County’s vibrant economy and unique natural beauty. Stacy believes in a balanced approach to local government that preserves the economic strength of the region while improving the quality of life for area residents and visitors.

Stacy is also passionate about giving back to her community and holds a distinguished record of service in both her professional and charitable endeavors. She recently served as Board President at the Boys and Girls Club of South San Luis Obispo County.  The organization serves more than 500 local youths daily. In 2019, she served as Chair of the Board of Directors for South County Chamber of Commerce.

Stacy holds a bachelor’s degree in Business Administration from California Polytechnic State University San Luis Obispo as well as a certificated degree in Professional Financial Planning from the University of California, Santa Barbara.

Daniel was appointed to the City Council in the spring of 2021. In his time on Council he has served on the boards of REACH, Visit SLO CAL, and the Zone 3 (Lopez Lake) Advisory Committee and serves as the city's liaison to the South County Chambers of Commerce .

He is a California native, an 18-year resident of Grover Beach, and has worn a variety of hats over the years of his career... all of which led him to this point in life's journey.

He has worked in marketing and copyrighting. He spent years in kitchens working in local restaurants and as a personal chef, and he spent nearly 15 years as a wholesale sales representative and sales manager to our local restaurant and wine community.

In 2021 Daniel took the leap to follow his heart and accepted a position as a fundraiser for a local non-profit organization, providing local youth with after-school programs and mentorship throughout Northern Santa Barbara and San Luis Obispo Counties.

Together with his wife and daughter, Daniel loves attending concerts in the park, hiking, painting, cooking, and connecting with his Grover Beach neighbors.

Ron has a diverse background including employment in City Parks, County Roads, Police Department, and the mental health division of corrections. He has supervised employees in both the private and public sectors. He has balanced budgets in the private and public sectors. Ron is detail oriented and will work aggressively for the interests of the citizens of Grover Beach. 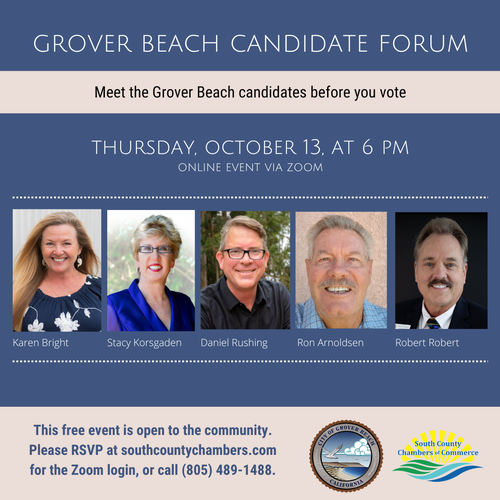 Open to the entire Grover Beach business community and public.